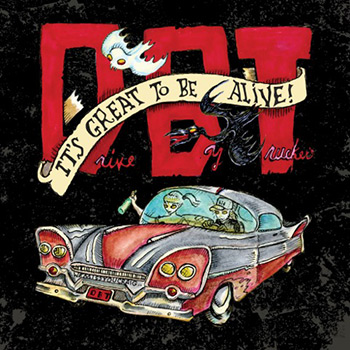 It's Great To Be Alive

Recorded Live at The Filmore

Drive-By Truckers are thrilled to announce that our long awaited live album, recorded over three nights at the historic Fillmore in San Francisco, will be released on October 30th, 2015 and you can start pre-ordering today!

We put together a few versions for different wants and wallets. It was an amazing weekend in San Francisco. We hope you’ll love what was captured.

3. "This Weekend's The Night: Highlights From It's Great To Be Alive!" (Standard vinyl)
Features a "best of" selection of tracks from the Drive-By Truckers 3-night run at the legendary Fillmore in San Francisco.
INCLUDES: 2 LPs + DL code

It’s Great to be Alive!

Once upon a time my dream was to play in a Rock and Roll Band. Not just any Rock and Roll Band, but a very specific one. An idealized version of my teenaged rock fantasy with air guitars replaced by well-worn battle-axes and a devoted following that treated us like we were the greatest band on Earth. It’s the kind of lofty ideal that set the hearts all ablaze in millions of little boys my age back in the era when dinosaurs did indeed roam the Earth.

I met Mike Cooley thirty years ago this summer. He was the roommate of someone I knew in college who needed another roommate. I met Cooley the day I moved in. I noticed he had a guitar leaning against the corner. He noticed I had a rusty-stringed old guitar amongst my only possessions when I moved my stuff in. Our apartment was a hellish dump of mildew and moss and we were flat broke so we spent many an evening sitting around drinking cheap beer and playing songs we didn’t really know. Neither one of us was very good but we clicked.

On June 10, 1996, I talked Cooley into coming to play on a single I planned to record one afternoon and Drive-By Truckers was born. We’ve since played somewhere around 2,000 shows, made ten studio albums (so far), backed up Bettye Lavette and Booker T. Jones; and have had the adventures of several lifetimes. As we head into our twentieth year this year, I feel that in many ways we are just beginning.

Last fall, we ended our very successful year of touring behind our album "English Oceans" with a three-night stand at our favorite room in the world. The Fillmore in San Francisco had always held a special place in our history and imaginations. We had long wanted to make a definitive live album and we decided that this was our chance.

As a band, we have always considered ourselves first and foremost a songwriter’s band and always said that "song is king" should be the basis of all artistic decisions. That said, we also built our reputation as a ‘Live’ band and as proud as I’ve always been of our records, we’ve also always been aware that there’s an element of our stage show that the records just cannot quite capture or parlay. 2014 turned out to be a sort of new peak in the life of this band. The latest lineup had really gelled into a powerful live act and the show had taken on some new levels musically and personally. We were ready to try to capture it into a live album.

Our long-time Producer, David Barbe, acquired the necessary mobile gear to record us and flew out to San Francisco to capture our three-night stand. We hired some horns, sold some tickets and played three special and unique shows. From those shows we have sequenced a sort of ultimate live DBT collection, one that hopefully captures the essence of our life’s work into one cohesive whole.

We are releasing a shorter version that provides a snapshot of what we do, but this box set goes far more in-depth. Songs and stories spanning thirty years of doing this thing sequenced to hopefully give as close as possible document of the DBT show.

Whether you count the life of our band as starting in 1985, when Cooley and I began playing together, or 1996, when Drive-By Truckers began, or even 2001, when "Southern Rock Opera" first burst us into some part of the public’s consciousness, it’s certain that we’ll never again be called a new band. Fifteen years is several lifetimes for most bands and thirty puts us in very rare company, indeed. Nonetheless, anyone who has been to any of our shows in the last three or four years can attest to the band being at top form, live and on record. I’m still chasing that song I’ve been chasing since I was in third grade, and I can’t wait to hear Cooley’s next song or to hear what he and the gang do with whatever I write next.

We originally began thinking of ‘The Live Album’ (as we called it for several years) as first and foremost a collection of songs spanning our entire career as DBT. Part of the joy of this incarnation of the band has been digging back and seeing what this band can do with songs from various periods of our history. I’m proud of every lineup we’ve had and of the records that we’ve made, but this incarnation has brought a primal energy and personal camaraderie to the process that takes it all to new levels and we’ve been really excited about capturing that.

We also decided against making it one literal show. As a band that almost always has allowed taping of our shows, there’s no shortage of live shows floating around (of various sonic quality) documenting all kinds of nights of this band (good and bad). Instead we wanted to create a somewhat idealized set list that flowed like and implied a sort of ultimate DBT Rock Show experience for posterity. We decided to release two different versions. A shorter 2LP version that hopefully encompasses what we do and a more in-depth full-on box set version for the more devoted fans. Whichever version, hopefully the end result is the same. It’s dark, funny, loud, a little profane and rocks like a motherfucker.

This Weekend’s The Night!

It all started as an inside joke. That’s what bands do on the road to break up the monotony and rigors. They have inside jokes. Lots of them. The better bands begin to have so many inside jokes that they take on a sort of alternate language that only they understand. Inside jokes have played a particularly large part in our band’s story. Our most famous record began as an inside joke that we cultivated until it took on a life of its own, something to talk about for thousands of miles driving from one show to another. "Tonight’s The Night". "Betamax Guillotine". "The List". "The Movie Version". It goes on and on.

For years we were devoutly unsigned, playing hundreds of shows a year and often joking as we were about to go on stage in some dive bar in Ames, Iowa or Columbia, Missouri or Fort Worth, Texas that ‘Tonight we were going to get signed’. Just the ridiculousness of that statement would be enough to fuel a round of laughter and make the night a little better. Some years later, we actually did get signed after a show in Fort Worth. I guess be careful what you joke about.

"Tonight’s The Night": in the early days it probably referred to some sort of debauchery but the expression lasted long after we had settled down from all of that. It definitely more to do with Neil Young than Rod Stewart but nonetheless a great way of signifying the importance of every single show, no matter where they might be. "Tonight’s The Night". Every night is important. Every show should be played like it’s the most important show we’ll ever perform. Play it like we might get signed. Play it like we might die before morning. Play it like it’s the last show we’ll ever get to play. It just might be.

Life can be a fleeting thing, but a life well lived is one where each night is played for keeps. Played loud and with wild abandon. This Weekend’s The Night!

It’s Fucking Great To Be Alive!!!

iTunes:
It's Great To Be Alive (Deluxe)
This Weekend's The Night (Standard)