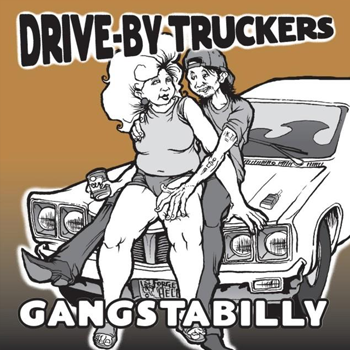 Don't give me that bull about how it's for the children
A man like that could never be a dad
What happens when he kills you?
What will they do then?
Sometimes you ought to ask yourself that

written on Elvis' birthday 1/8/97 at the grocery store
dedicated with love to the great Tammy Wynette, Alabama Music Hall of Fame inductee

I got so much money I don't need smarts
My records are flying to the top of the charts
and I'm eating in all those fancy restaurants
and Hanging out with Sam Phillips
and I owe it all to him
Oh, the shape I'm in
The devil says the only thing that's buggin him
is Hell's filling up with Republicans
(repeat chorus twice)

"She's a beaute, yes sir she is" said EZ DAN, fifty five, a bad age,
smelling of Brute from Fabrege' and sweat
EZ DAN don't bathe a lot these days (and why the hell should he anyway?)
"She's got a few miles on her, but then again, who don't?"
he said with a slight chuckle, the recent Binaca Blast still lingering on his breath,
"and besides, them's highway miles"

I shifted my weight from one foot to the other
it certainly wasn't the car of my dreams, but the price was right
and EZ DAN assured me the mid 70's were a particularly nice period
for Chrysler products in general
"and this one is a Volare'"
and besides, finally having an eight-track means I can play
all them tapes I ain't been able to listen to since high-school

so we stuffed EZ DAN's body in the trunk and hauled ass out of town
but somewhere just past the middle of nowhere the fuel pump blew
and the oil pump too, and the piston rods hurled straight through the engine block
dropping oil, gasoline, water, and anti-freeze onto the Alabama red clay below

Ain't that a bitch?
I ain't never been lucky with love

I'm sick at my stomach from the A.Z.T.
Broke at my bank cuz that shit ain't free
but I'm here to stay (at least another week or two)
I can't die now cuz I got another show to do

Don't give me no preachin' no self servin'
I ain't no angel but nobody's deserving
I can dance on my own grave, Thank You!
but I can't die now cuz I got another show...

Some people keep saying I can't last long
but I got my bands I got my songs,
liquor, beer, and nicotine to help me along
and I'm drunk and stubborn as they come
chain smoking, guitar picking, til I'm gone

I ain't got no political agenda
Ain't got no message for the youth of America
'cept "Wear a rubber and be careful who you screw"
and come see me next Friday cuz I got another show...

Some people stop living long before they die
Work a dead end job just to scrape on by
but I keep living just to bend that note in two
and I can't die now cuz I got another show...

Only seat left is right up front
I'm not a bit surprised
Back is soft but the seat is hard
Why can't they get it right?

Reverend Bob is pointin' his finger
Mom and Dad follow every last word
All this hollerin' makes me wonder
Does a whispered prayer get heard?

Reverend Bob is preachin' out thunder
Fire and brimstone pouring down
Me, I'm wondering what's for dinner
Waitin' for 12 o'clock to come round

I am an angel

Panties In Your Purse

Saw you standing in the hallway, red plastic cup, and one of those big long cigarettes
You asked me if I could play you some Dylan
I said "Dylan who?" you told me to kiss your ass
I apologized, but you could tell I didn't mean it by the way I rolled my eyes
and when you said it wasn't me it was you
somehow I knew you were gonna tell me why

Stuff was flying out of the window
falling and breaking on the pavement underneath
He's screaming at you, red faced and fuming
He'd come home early, parked his car way up the street
You had your stockings in your hand, panties in your purse
it was ten a.m. and all the neighbors heard
him calling you a whore and a tramp
you just stood there while your heels sank into the warm wet ground

He got a lawyer, you got a bottle
He got the children and you moved in with your mama
She fixes breakfast and lets you use her car
she don't care how late you call to tell her where you are
Ya'll still fight and she still nags you some
but somehow it's different now than when you were young
It's your own damn fault you been threw hell
for one reason or another, somehow she kinda blames herself

I drink half a case of beer on my way home from work
Daddy needs his medicine to keep his hands off Mama's throat
Baby, push a little harder cuz you got me on the brink
of spilling more than guts about why Henry drinks

Telling you so much about why Henry drinks

for Mom and Chester, on the occasion of their marriage, July 1994

Bullet was my favorite movie that I'd ever seen
I totaled my go-cart trying to imitate that chase scene
That Duster had six hubcaps, know what I mean
and I love the way they all flew off when it landed in that ravine

I really loved The Getaway back when I was eight
that pussy Alec Baldwin sucked in the remake
and speaking of pussy, I guess Steve got it all
He fucked Faye Dunaway and he fucked Ali McGraw

lyrics by Patterson Hood
music by Drive-by Truckers (Cooley, Hood, Howell, Lane, Neff, Stacy)
©1998 Soul Dump Music
dedicated to my grandfather W. M. Patterson
(Mesothelioma is a rare cancer of the lining of the lung caused by exposure to asbestos. Its mortality rate is known to be extremely high.)

One day I'm gonna get out of Buttholeville
Gonna reach right in Gonna grab the till
Buy a brand new hat and a Coupe deVille
lay a patch on the road that runs over the hill
There's a beach somewhere where the water's are still
Gonna lay in the sun till my skin peels
Drinking the best scotch whiskey, eating lobster and eel
and I'm never going back to Buttholeville

originally written in July 1988
a lot of folks back home really take issue with (and to a large extent misunderstand) this song.

Sandwiches For The Road

and if you see me on the street and if I whop you on the head
you probably got it coming
and if you hit me back, we'll call it even, but I ain't going down easy
cuz my mama loves me and I got friends in Decatur, Alabama.

written for and dedicated to the great Eddie Hinton
(His masterpiece, "Very Extremely Dangerous" is now available on Capricorn Records. Mobile Fidelity has also recently released "Letters From Mississippi" and it is very fine.)
Thanks to Johnny "Sailcat" Wyker, Wayne Perkins, Dick Cooper, and Jimmy Johnson for the folklore.

This is our weakest album and we didn't really know how to do what we were trying to do yet.
It does, however have The Living Bubba, which is still the best song I've ever written, Panties In your Purse, which was one of Cooley's earliest creations, and Late For Church, which was written by our original bass player Adam Howell and is one of the weirdest and sublime things we ever recorded.
Jim Stacy's artwork was great, appropriate and misunderstood. I still love it. On the original CD we tried to make it sound like 2 sides of vinyl. Here on vinyl, it is actually 3 sides and sounds so much better than the original release that it is like a much better album to me. I wrote Demonic Possession during Pat Buchanan's speech at 1996 GOP convention, which was on the TV in the kitchen where I was (hardly) working at the time.
-Patterson Hood