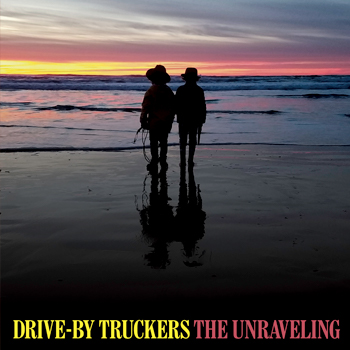 Rosemary with a Bible and a Gun

Strong as the day was long, Rosemary would sing along
Wheels rolling steady down the way
The ashtray it would fill up twice, the windows down felt nice
as miles stretched the twilight of the day

Driving up I-55, Mississippi zooming by
Salvation in the cool November air
I’m searching for the mixture that could paint a pretty picture
of the wind blowing through Rosemary’s hair

We took our leave and headed north, the tank had twenty dollars worth
Highway called our names like siren’s call
Twenty five and on the run, William Eggleston
Parking lots of neon in the fall

Slow down take it easy
There’s no going home again

When the carnage was over you could hear the cellphones ringing
You could smell gun powder in the air
On the bloody ground LED’s were blinking
Deliver us from evil, thoughts and prayers

They’re lined up on the playground, Their hands all in the air
See it on our newsfeed and we cry out in despair
They’re counting up the casualties and everyone’s choosing sides
There’s always someone to blame Never anywhere to hide

This white noise in my head, I think I need a filter
A pressure valve to keep from blowing up
When the shit comes down, I pray I can rise above it
Hold me close when I’ve had enough

The Flat Earthist realized as he flew through the skies
The curve of the horizon as he fell
He saw the world was round, just before he hit the ground
And gravity called out to close the deal

When my children’s eyes look at me and they ask me to explain
It hurts me that I have to look away
The Powers That Be are in for shame and comeuppance
When Generation Lockdown has their day
They’ll throw the bums all out and drain that swamp for real
Purp walk them down the Capitol steps and show them how it feels
Tramp the dirt down, Jesus. You can pray the rod they’ll spare
Stick it up your ass with your useless thoughts and prayers

In a town that ain’t nowhere near
just like every town everywhere
Folks working hard for shrinking pay...

They say we have to hang on a little bit longer and a savior will come our way
We’ll know him by the neon sign and the opulence he maintains
If Amazon can deliver salvation I’ll order it up on my phone
With Big Brother watching me always, why must I always feel so alone

Men working hard for not enough, at best
Women working just as hard for less
They get together late at night at bars
Bang each other just like crashing cars
Working hard but it don’t seem enough
Calloused hearts make even love seem tough
Prescription pills to make the pain hurt less
Until your calloused heart just needs a rest

Losing your joy, playing with dangerous toys
insulate yourself from life and all of its big noise
Insinuate a fever dream, instigate a requiem
a deafening explosion of shame, an orgasm inside of your brain

Beautiful lost girl, you turn your back on this mean sweet world
A taste of heaven, some part of you dies
til you’re something you can’t recognize

Are we so divided
That we can’t at least agree
This ain’t the country that our granddad’s fought for us to be?
Babies in cages

Patterson Hood © Mt. St. Helen Keller Music (BMI), All rights administered by Words and Music, a division of Big Deal Music LLC
June 19, 2018 - Dunwoody GA. / July 19, 2018 - Kalamazoo MI.
The Intro to this track was recorded at the Dunwoody home of my beloved in-laws. The full band track was recorded in one take, live in the studio with live vocal and a special guest appearance from our friend Cody Dickinson playing Washboard through an amp, wah pedal and delay.

As long as there have been stories lies and airwaves
what makes a man a mans been right up front,
in visions, boys are sold of what it could be
and grievance when it ain’t like what they thought,
when money and respect seem to elude him
and being white alone don’t make the ladies swoon
there’s no shortage when it comes to hearing voices
telling him it’s him that’s done unto

Is there an absolute beginning
or something beyond the end?
Will I come back as that dog
Or will I have to live through this again?
The truth seeps out between us
in the spaces we’re neglecting

When the push comes to shove
and our devils come at us running
Will we be caught in the flood
or something far less stunning?
Will that serum keep us honest
from the answers we’re deflecting?

There’s a voice within the void
and I swear it sounds familiar
within the truths that we’ve destroyed
whispering come here
and the answer is within you
but it keeps on disconnecting
There’s an evil in this world
I seen it in the news
of babies dead in schools
and scattered in the pews
for reasons without answers
in the dark, beyond protection
I’m moving through the void
Staring down the fright show
Standing in the darkness
Waiting for the light show
I try with all my might
to seek the truth you’ve been rejecting

There’s the whiplash of the news
and the evil man’s tirades
A joker’s motorcade, military parades
Lives in the balance of the dirty deals made
to win elections

Guns and ammunition
Babies in a cage
They say nothing can be done,
but they tell us how they prayed
In the end we’re just standing
Watching Greatness Fade

The Unraveling is Happening…

21st Century USA, tanks rolling through the streets of Washington DC as our utopian dreams give way to a dystopian now. Nearly a generation since the towers fell and the shit came down. William Gibson’s dark visions have come to pass, everyone is connected and more disconnected than ever. Our children have lock-down drills.

Welcome to the new normal. We put babies in cages now. Shit’s fucked up. Grievance merchants, running down innocents on a narrow street in a beautiful college town. The gold plated toilet tweeting out lie after lie. Emboldened and supported by the Faux News Fascists and their “MAGA” chanting lemmings. No wonder people are OD-ing in record numbers. Who wouldn’t want to tune out during
the deluge. It’s going to take more than thoughts and prayers to solve this shit.

Meanwhile, many of us are just trying to raise our families, do our jobs and chase our dreams. Never mind that fewer than ever can afford to go to college and many who do are lassoed with so much
debt that The American Dream is reduced to doing whatever you have to do to pay for student loans and health care. They bailed out the banks and told the rest of us to go fuck ourselves. Don’t think about buying a house or upward mobility. That flag’s at half-mast and there’s a bonfire at the base
of the pole.

Yet here I sit. On my front porch, on a beautiful spring day, watching the sun set behind green trees casting shadows upon a dead-end street littered with Big Wheels and discarded scooters. The sounds of kids jumping on trampolines echoing in the distance. Such a lovely day it’s hard to feel too bad. Such is one of the dualities of this life.

Dualities have always been an obsession of mine and to some extent to the band itself. Being raised liberal in Alabama probably lends itself to that. These fucked up times have given us strong topics
to write some of our best songs about things we’d much prefer to not ever have to write about.
The news has become that car crash you pass and try not look at, yet I dare not look away. When
it comes to the havoc that the ruthless and powerful can reap upon our day to day lives, the political
is very personal.

My family is strong. My band has never been better. I still have my health. We all still have a lot of fight left in us and nobody is backing down from the shit.

We recorded most of this album in Memphis at Sam Phillips’ dream lair. His mad-genius echo chambers reverberating down the pastel painted hallways. Mick stopped by one day. No shit. It’s
been that kind of century. Most of the tracks were cut more or less live. Many in one or two takes.
We played them loud. You should too.

Don’t give up the fight and never stop chasing the dream. Vote and Resist. Sometimes that’s the best we can do. See you at The Rock Show!

Love to The Heathens who travel far and wide, spreading the word and supporting our band.

Scott Baxendale has been building incredible guitars for us for a few years. They are amazing handcrafted instruments made with love and care (and only the finest of woods). Scott works out of The Baxendale Guitar in Athens, GA, and can be reached at www.baxendaleguitar.com.