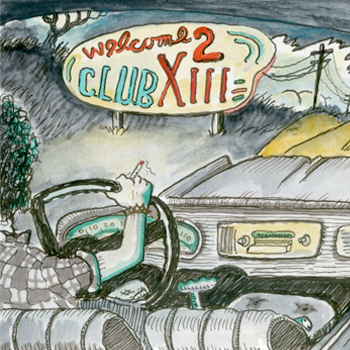 LYRICS    COMMENTARY   CREDITS
Arriving as Drive-By Truckers enters its 26 th year, Welcome 2 Club XIII marks a sharp departure from the trenchant commentary of The Unraveling and The New OK (both released in 2020). Produced by longtime Drive-By Truckers collaborator David Barbe and mainly recorded at his studio in Athens, GA, Welcome 2 Club XIII took shape over the course of three frenetic days in summer 2021 – a doubly extraordinary feat considering that the band had no prior intentions of making a new album. Featuring background vocals from the likes of Margo Price, R.E.M.’s Mike Mills, and Mississippi- bred singer/songwriter Schaefer Llana, Welcome 2 Club XIII was recorded live with most songs cut in one or two takes, fully harnessing Drive-By Truckers’ freewheeling energy. Songs like the softly stunning “Wilder Days” see the band – whose lineup also includes keyboardist/guitarist Jay Gonzalez, bassist Matt Patton, and drummer Brad Morgan – looking back on their formative years with both deadpan pragmatism and profound tenderness, instilling each song with the kind of lived-in detail that invites bittersweet reminiscence of your own misspent youth.
“Cooley and I have been playing together for 37 years now,” Hood says. “That first band might have failed miserably on a commercial level, but I’m really proud of what we did back then. It had a lot to do with who we ended up becoming.”

Used to go out driving, sometimes late into the night
Twenty-one, fucking round and wasting gas
Across the bridge to Sheffield then out into Tuscumbia
Where the main street’s a time-trip to the past
Behind the Hotel Grant there was a flaming dumpster
I saw a group of Klansmen in their robes
I circled back but they had vanished like rats
Leaving nothing behind them but some smoke

If you’d like to tell your story, by all means go tell your story
But don’t forget that you only have one side
So parlay your Innervisions with the usual suspicions
As you make your grand approach to the divide
And when you’re changing lanes and passing on the right
Check your blind spot and signal your intents
I saw that Honda full of girls go airborne into the trees
In the pouring rain on interstate ten

Used to go out driving, sometimes late into the night
Trying to make sense of the pieces of my life
Still young enough to not know how the puzzle fits together
“Nothing to fall back on but a knife” *
The bombed out looking factories on the east side of town
Blasting “Here Comes a Regular” on ten
An epiphany, a moment of clarity
Driving all alone at 4AM

In a van full of stink, we set out upon the plains
to the black hills and Rockies and Cascades
We had never been out west, at least not further out than Texas
As our lives spread out before us like a page
An unwritten novel, our Huck Finn adventure
come to life, we were living in real time
That rare day when we just turned the music off
And let the wide open vistas fill our minds

We were already older, yet much younger than today
Pushing hard against the limits we’d arise
Ever westward, we saw sunglass reflections
Of a setting sun in vast Montana skies

And there’s the alternate reality where everything was different
Than the world of happy endings we endure
A moments distraction, an alarm clock powered down
A blind spot not checked before a turn
That Grand Prix we saw head-on, on our way to see Replacements
When I hydroplaned but caught the road in time
That guy on I-10 driving east as we were west-bound
In Florida, 2000, April-Nine
That ten degree decline headed down Teton Pass
Cooley driving, snow on solid ice
That meteor that fell beside our bus in Idaho
As we drove on past a near flaming demise

An uncontrollable child, given to fantasy
A leaded lobotomy left Maria wild
with a mob in her head holding Magdalene’s down in asylums

If some know nothing, nothing’s keeping some from knowing it all
What nobody saw is anybody’s call
Predispositions turn spaces in men
Into thirsty pages for a hell bent pen

So you’ve gone astray in a New York minute
Nothing left to say or ways to spin it
You’ve just gone too far, unsafe within it
All spun out and swept away

You were here one day, gone by sunset
You set out that way, lest we soon forget
Blood on the sawdust, light coming in from a broken window pane

I shake and pine
You didn’t really mean to do me wrong this time
Make it up as we go along to fake and find
A reason and a rhyme, The strength to carry on

You shake and pine
For a way out of this hell besides a life of crime
Standing before judgement, it’d be so sublime
to step out of your shadow and walk towards the sun

You got the hang, all you're missing, Alabama claw,
above the bangs and lashes and we saw it all,
reaching for the stars but only catching dust

We will never wake you up in the morning

Buenas noches, sweet prince behind the eight ball and your rent
Eviction notice on your door and all your money spent
Hearts broken by your actions but you had the best intentions
There were bottles in your bedroom and nothing in the kitchen

And the last time we ever saw you
You were clinging to the barroom
Days on end we tried to call you
Bells were ringing, tears were falling
The door was opened by the cops but you were up above the treetops
We will never wake you up in the morning (X3)

Welcome 2 Club XIII.
All the usual suspects are acting weird.
The bartenders can’t be bothered but we’re all glad you’re here.

Sidewinder’s in spandex, The parking lot is packed
Everyone is waiting outside
Meanwhile Adam’s House Cat is the opening act
Train songs and People Who Died

Forged in Hell and Heaven Sent

We went through so much together, you and me and all the gang
All those crazy death defiers chasing storms and racing trains
It’s a wonder there’s a single one of us still left alive
To feast on best forgotten memories and toast the ones up in the skies

It’s been so long since I’ve seen you and I know you’ve been through hell
And it’s taken its toll on you and it’s lessons served us well
But I still can see that sparkle in your eyes and in your smile
Glad you’re back in town this evening, have a seat and stay a while

So you had a little daughter and I see she’s almost grown
And I guess she’s had to grow up pretty fast
Time went racing past us, I’ve got two kids of my own
And I’m trying to make this time that we’re in last
Not let the moments all slip past us
Answers to questions they’d never ask us
The things that kept us youngest came pounding down upon us
The whole world slipped out from under us

It’s been too long since I’ve seen you, wonder where the time all went
A whole decade before and two years since your accident
It’s a miracle you’re walking, even if a little bent
Guess the minutes we’re together are forged in hell and heaven sent

No matter how many pens a poet drains, how full of shit he is or ain’t
well it ain’t up to him to tell you
So if burning out sounds better and leaving handsome corpses makes good sense
well then by all means crown the lizard

Every single storied flameout’s purgatory playlist
skirts the payouts anyone from his loins might collect
His is a legacy in tourist traps, conspiracies that took him out
and tattoos someone else lives to regret

All those well intentioned lies that I myself romanticized
believably enough to pass as love songs
More than one man on one knee, it never stops amazing me
how easily the heart hears what it wants to

Every single storied flameout’s purgatory playlist
skirts the payouts anyone from his loins might collect
His is a legacy in tourist traps, conspiracies that took him out
and tattoos someone else lives to regret

Billy Ringo in the Dark

When you wake up in the morning and you ask yourself
“Why does it even matter if I exist at all?
if I’m going through the motions
and my better days have passed
Should I even stick around?
Do I have the wherewithal?”

Love to The Heathens who travel far and wide, spreading the word and supporting our band.

This album is dedicated to the loving memory of Linda Phillips who founded Nuçi’s Space in Athens Georgia and was a tireless supporter of the health and mental well-being of the Athens music scene including our band. One of the absolute most incredible people we have ever had the gift of knowing.