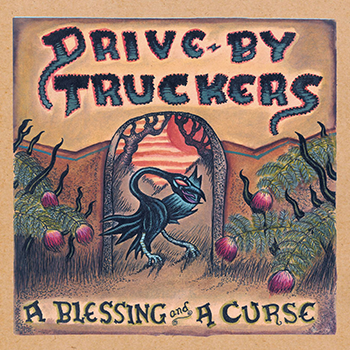 A Blessing and a Curse

Most of this album was recorded in a couple of weeks up at Mitch Easter's fantastic recording facility The Fidelitorium in beautiful little Kernersville NC back in August of 2005. We finished it, tidied up, cut a couple of extra tracks and mixed it back home in Athens GA at Chase Park Transduction. Most of the album was written around the time it was recorded. About half the songs were recorded within hours of being written. Thanks to our friend Danny Clinch for inspiring the title of the album.

I can't blame you but it's a shame
you can't cover your ass sometimes.
It's that kind of town and you're so far down you can't get up.
I can't tell you what to sell and how to tow the line
and when to just give up.

You got it down, you been around
and you won't change your life
for redneck cops and traffic stops and residue
but I can't tell you all the hell they'll put you through inside
and what they'll do to you.

These cities blur before me, a swirl of colors leaned against the sky
Gone so far away and I never really told you good bye
I know it's kind of lame but sometimes things just turn out that way
We were the best of friends and I'll always remember you that way

We started out with nothing, but wild plans and big ideas and dreams
You were quick to swing the hammer and always fast with some ingenious scheme
Sometimes we argued violently but forged it out of bedrock into steel
Our foundations were so solid and our instincts based on something very real
I feel so damned nostalgic every time I think about those times
I forget how it became that I wouldn't recognize you on the line
I start to feel so guilty but goddamn it I swear to you I tried
To bridge between the distances before I left without saying good-bye

I have friends I met last weekend and friends I've had since I was eight
Friends I've said goodbye to and friends who unexpectedly passed away
And nothing is disposable; at least it's never been that way for me
Its not like you were an acquaintance that I could say never really meant anything to me
No we were really great friends and I always thought that it would be that way
Yet I wonder if I'd know you if the guy that I saw last walked in here today
And I swear until I die, I never would have expected you and I
To grow so far apart and leave without ever saying good bye

She's got me tied in a knot. That's what I thought she'd do.
Don't ask me what's on my mind. I'm fine. I'll push on through.
Not much to see on this angry street, so I'll sleep the day away.
Look past my barnacled mind and in time I'll roll the stone away.

Brass knuckles and birds on a wire retire but no one gets free.
I'd pay to tear these chains away, this steel sympathy.
Cut bait and cold black forty weight, no one can sing for me.
They fall down with grease in their eyes and cry. How could this come to be?

So he opened it and found a faded picture
Of a girl he's never me, but somehow seen
Like a memory of a dream from early childhood
Like a virgin's idea of release

A BLESSING AND A CURSE

Is that how you're gonna write your story?
Down in your time as a high-flying flame out?
Sucking on what's left of your trust fund?
Sucking on the end of a shot gun?

It's a blessing and a curse
Watch out, Eugene, you don't make things worse
Wild dreams come true, what to do then?
Confusion and glory

A WORLD OF HURT

Once upon a time, my advice to you would have been go out and find yourself a whore
But I guess I've grown up, because I don't give that kind of advice anymore

I was 27 when I figured out that blowing my brains wasn't the answer
So I decided, maybe I should find a way to make this world work out for me
And my good friend Paul was 83 when he told me; that "To love is to feel pain"
And I thought about that then and I've thought about that again and again

"To love is to feel pain" there ain't no way around it
The very nature of love is to grieve when it is over
The secret to a happy ending is knowing when to roll the credits
Better role them now before something else goes wrong
No, it's a wonderful world, if you can put aside the sadness
And hang on to every ounce of beauty upon you
Better take the time to know it there ain't no way around it
If you feel anything at all

So if what you have is working for you, or you think that it can stand a reasonable chance, and whatever's broken seems fixable and nothing's beyond repair
If you still think about each other and smile before you remember how screwed up it's gotten or maybe dream of a time less rotten
Remember, it ain't too late to take a deep breath and throw yourself into it with everything you got

It's great to be alive

Our most controversial and polarizing album. I'm frequently told it's someone's favorite one of our albums. Then ten minutes later someone tells me how much they hate it. I've been through periods of both emotions at different times myself. Upon listening to it 2+ years later I still have decidedly mixed feelings.
I always loved Big Star and The Replacements and side one is sort of our attempt at making that kind of record. (With a little Faces and Blue Oyster Cult thrown in for good measure). We had an agenda and were trying to find common ground at a time when it was a little hard to come by. I can kinda see why some folks hate it and why some folks love it.
Side two is less controversial to me. Space City is one of the most beautiful songs I've ever heard and A World of Hurt is probably my 2nd favorite song I've written. Wednesday sounds like Adam's House Cat and I always liked that band.
It's hard to write about a cliché without sounding clichéd and the title cut pushes that to the edge. I still don't know if I like that song, but I really love the guitars. Vinyl seems to make the least difference on this one but as I said, side 2 is pretty good.

Most of this album was recorded in a couple of weeks up at Mitch Easter's fantastic recording facility The Fidelitorium in beautiful little Kernersville NC back in August of 2005. We finished it, tidied up, cut a couple of extra tracks and mixed it back home in Athens GA at Chase Park Transduction. Most of the album was written around the time it was recorded. About half the songs were recorded within hours of being written.
Thanks to our friend Danny Clinch for inspiring the title of the album.

DBT would like to thank J. Reid Hunter, Mike Luba and Madison House, Frank Riley, Matt Hickey and all at the High Road office, Paul Fenn, the folks at Asgard and our family of support at home and abroad. We couldn't do anything without you.

DBT would like to thank Wes and Jyl Freed, Lilla Hood, Danny Clinch, The Beautiful and Historic Alabama Theatre.

DBT would like to thank Peter, Cameron, George, Traci, Steve, Kat, Mary, Claire, Jay, George Jr. and all the other incredible folks at New West Records for working so hard for the Rock and treating our music with tender loving care.